I seem to be growing a wart on the end of my nose just in time for Halloween.  It’s all part of my involuntary transformation from maiden  to crone.  The wart is meant to complement the hair on my chin, I suppose, just as the 20 extra pounds I’ve added over the last few years highlight legs that no longer tan.  For all I know, I’m also growing a tail.  Something does seem different back there.

There will come a day, maybe in 15 years or so, when I tell my beautiful teenaged granddaughter that I once looked like her.  She will smile indulgently, and say, “I know, Grammie.”, but she probably won’t believe that I ever could have been young.  That my legs were lean, muscled and tan and that I used them to run for miles.  That my body was willowy and responsive.  That my face was unlined and my hair a color other than white.

I expected to lose my looks when I turned forty.  I dreaded forty.  I really liked my thirties.  That was my  decade. But, as I entered my forty-first year,  I noticed something.  Nothing really changed.  I still had a youthful glow, still had  a nice figure, no gray hair….I thought to myself, “Well, damn, forty really  is the new thirty.   Thirty-sixish.”

I went on with my life, sometimes laughingly blaming things on aging. Things like forgetting where I put my keys (getting senile in my old age) or the 5 extra pounds gained on vacation (can’t eat like I used to), and the days I didn’t feel like doing much (I’m  slowing down).  But for the most part, I had put the fear of aging behind me.

Then one night near the end of my forties I woke up drenched in sweat, and that old witch, Menopause, introduced herself.

Menopause didn’t just move in.  She took over.  All I had known about menopause was the legend of hot flashes.  Since I’m so often cold, periodic blasts of heat didn’t seem like a bad thing to me.  Nobody said anything about burning at the stake.  And there were other things.  Things nobody saw fit to mention. Pervasive mild anxiety for no reason, a perpetual state of fogginess that makes concentration difficult to maintain, sleep disruptions that leave me staring into the dark, a lack of control over my mood as it shifts from placid to raging inferno in the course of seconds.

Which brings us back to the wart on the end of my nose just in time for Halloween.

Menopause isn’t just turning me into a crone, it’s breaking me down and rebuilding me from the inside out.  Without ego and entitlement, without expectations of how things should be, with a heightened appreciation for the moment, with a longing for peace, and with a more efficient operating system.  I may look like a witch this Halloween, but it’s just the packaging. 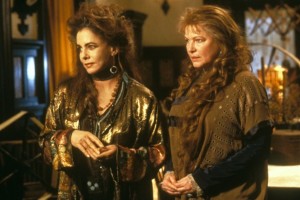 Two of my Favorite Crones