littleb has wanted to visit New York City for a long time and so we went over Thanksgiving weekend to celebrate his December birthday. Bill sang New York, New York way too many times on the drive down. He has a nice voice but he’s no Frank Sinatra. Then again, I ate way too many Sour Patch Kids and had a sugar attitude before we even hit the Connecticut state line.

The first day, on the recommendation of a well-traveled friend of a friend, we visited MacDougal Street in Greenwich Village to pick up lunch and then walked down to Washington Square Park to eat. I was interested in the park because I’m currently reading Alice Hoffman’s, The Rules of Magic, which features MacDougal Street, Bleeker Street and the Washington Square Park. 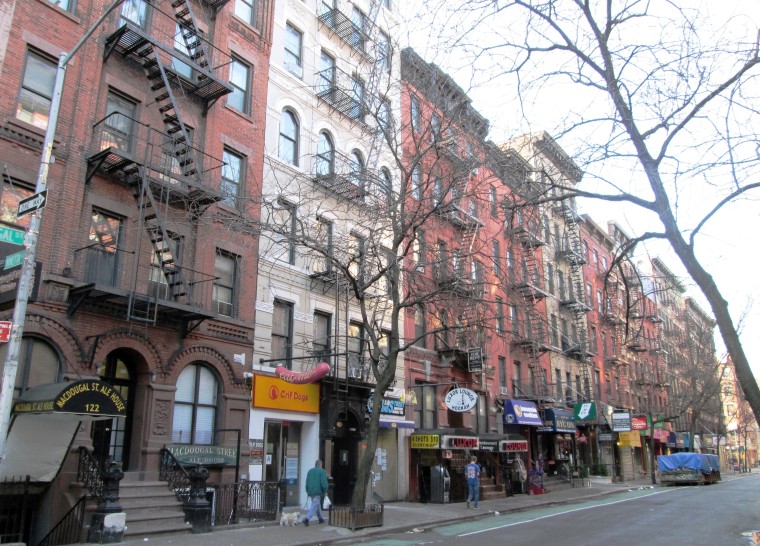 I borrowed this picture of MacDougal from Wikipedia. It’s a funky street with a lot of history and many meal options. We ordered lunch at a place called The Creperie NYC. It was good, fast and relatively healthy.

From there, after Bill tried (unsuccessfully) to talk his way out of a parking ticket, we made our way down to the 9/11 monuments. The pictures of the monuments don’t do it justice. There are two man-made waterfalls, one in the former location of each tower, with the names of the fallen inscribed around the borders. The last time I was there was in November 2001. It was moving to see what has been done on the site. One of my favorite moments was seeing, and reading the story of, the Survivor Tree. There is still a lot of construction going on around the site but once you get further in to where the pools and trees are, the bustle falls away and the crowds around the monument seem quiet and contemplative. 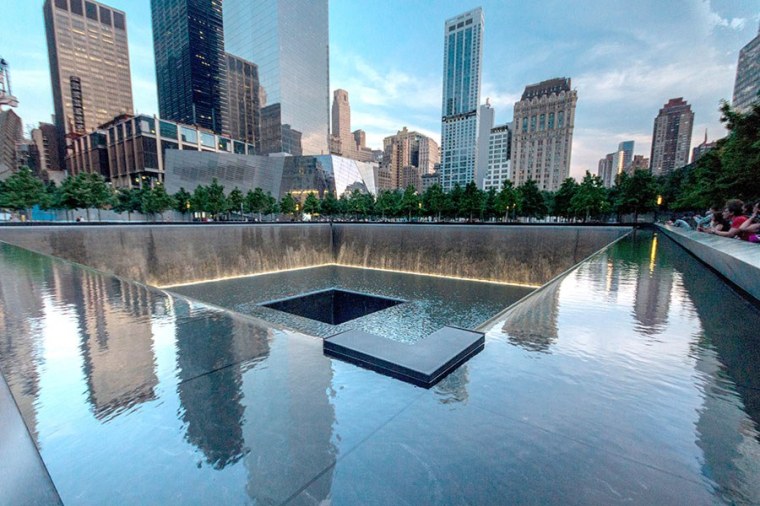 I took photos but couldn’t get one that I was happy with. I borrowed this one from Architectural Digest. This was an experience that is hard to simulate with photos, even great ones like this. Of everything we saw in NYC, this would be the one thing I would say you need to see in person if you can.

Next, we stopped by Rockefeller Center. The tree was up but wasn’t yet decorated. It felt odd to see a tree that belongs in a forest overlooking a skating rink in a big city. It made me wonder if any animals had been displaced in the relocation or, perhaps, were there animals still living in the tree? How surreal would it be to wake up in your same old house but in a huge city? There’s a good children’s book in there somewhere. I wonder what happens to the tree after Christmas? I’m not sure how I feel about cutting down a giant tree and relocating it to the city for one month out of the year. It seems like a terrible waste. I guess that makes me a hypocrite. We always have a real tree. Smaller, sure, but it’s really no different. It’s funny how we do what we were raised doing but then seeing it done in a different context can cause us to reconsider. Eating meat is a good example. I was raised eating beef and that seems normal but when I hear about a culture eating dogs or horses, that seems horribly wrong. Kind of a gross example. Let’s move on. So, I might have to rethink the whole Christmas tree thing, right? Maybe it’s time for a faux tree. Maybe I could pot a live one and keep it all year round. That might be cool but is that even possible? I don’t have much of a green thumb. Ferns die in my care. I’m not sure how I’d fare with a whole tree. What do you think? Do you have a real tree for the holidays? Am I over thinking again? Should I become vegan? 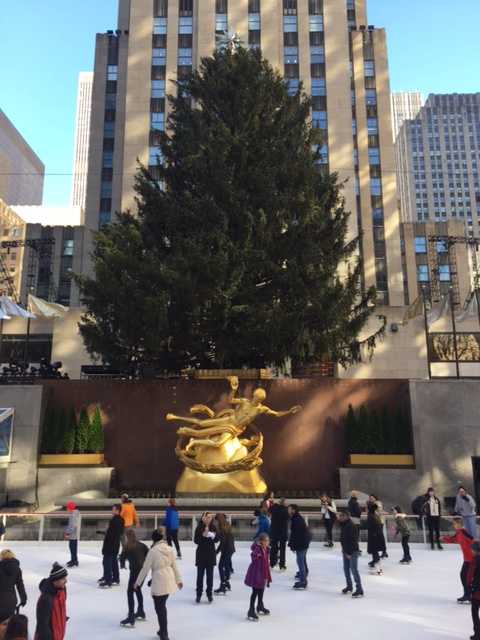 Imagine lights. Lots of lights. And maybe a few chipmunks.

From there, we checked into our hotel where we discovered our room had a view of the Empire State Building. 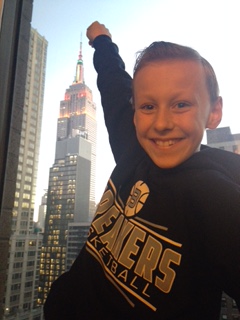 We ate dinner Friday night at Gigino Trattoria, another recommendation from a friend. It had a neighborhood-favorite kind of vibe. The meal was delicious and not too expensive, the service was great but not fussy, and the atmosphere was low key. I wish it was located in my neighborhood so that I could visit more often. 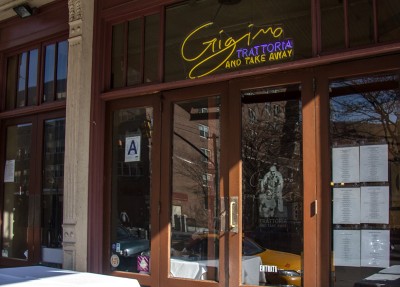 We also visited Bryant Park, which was just up the street from our Times Square hotel. The festive lights draw you into the park but once you are there, you quickly realize it’s more of an open air mall with little pop-up shops and food stands. I was greeted by a friendly, smiling little man in a gold robe who wished me peace several times and quickly slipped black bead bracelets over my and littleb’s wrists before showing me his book where I was to write my name and the amount of money I was giving him. We ran into the monks all over the city, particularly in Central Park. I looked them up when I got home and read that they are not real monks (big surprise) and that they’ve become rather a nuisance at many of the city’s parks and attractions. I feel bad for the real monks, who must be getting a bad reputation. But I digress-back to Bryant Park! The best thing about Bryant Park, besides the festive air and twinkling lights, is that it backs up against the New York Public Library, which, when lit up at night, gives visitors in the park a glimpse of its gorgeous interior. We went to the library the next morning for a closer look. 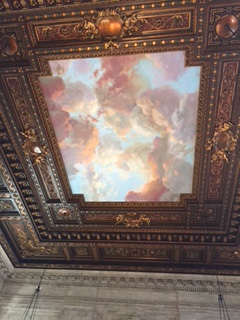 We spent most of the day Saturday, or at least it felt that way, waiting in line to get to Liberty Island. I reserved our tickets online and picked them up on site, which I would definitely recommend as the line for people who bought tickets on-site was about three times as long as ours. First, you get in line to pick up your tickets and then you get in another line for your security screening which, on the day we were there, was about an hour long wait. The screening is exactly what you would find in the airport. I felt pretty safe by the time we finally walked onto the ferry. From there, it was a short, fun trip to Liberty Island. We only had tickets to Liberty and Ellis Islands, not the statue, which is a whole different ball of wax. You have to book long in advance to get access to the pedestal or crown of the statue. Bill and I are not so good at advance planning but were happy to get as close as we did.

littleb and the lady. There was a lot of construction going on. 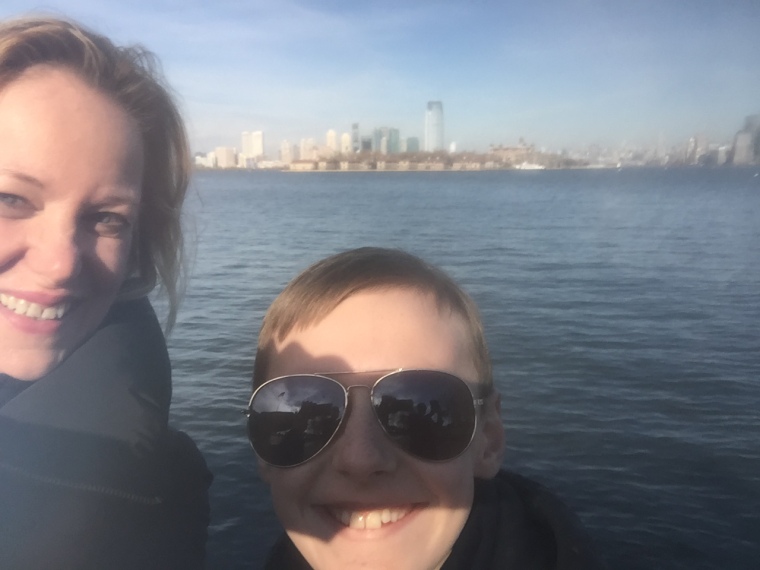 lttleb, me, and NY skyline

Saturday night we ate at LegaSea in the new Moxy Hotel. The hotel and the restaurant are trendy and designed to attract more of a millennial crowd, not aging baby boomers like Bill and me, but the owners of my hotel also own this one so I wanted to check it out. There is a rooftop bar on top of the building called the “Magic Hour”. It’s billed as an urban amusement park. We wanted to go up but not all of us were old enough so Bill took a quick walk while littleb and I hung out in the lobby pretending to be trendy (me) and older (littleb). After dinner, we walked around for a bit before returning to our own hotel. On the way, we were stopped by another of the city’s unique panhandlers, the costumed characters. These particular guys were dressed as super heroes. They try to engage your kids in conversation and then encourage you to take a photo with the expectation that you’ll throw them a few bucks. I guess everyone has to make a living and this is one way.

Sunday, we walked to Central Park. It was a beautiful day-sunny and warm for the time of year. Then we headed back to the hotel to pick up the car. It was a fun weekend but we were glad to get home. When people ask me what to see in Rhode Island, I always tell them about Water Fire. What do you recommend in your city or state? 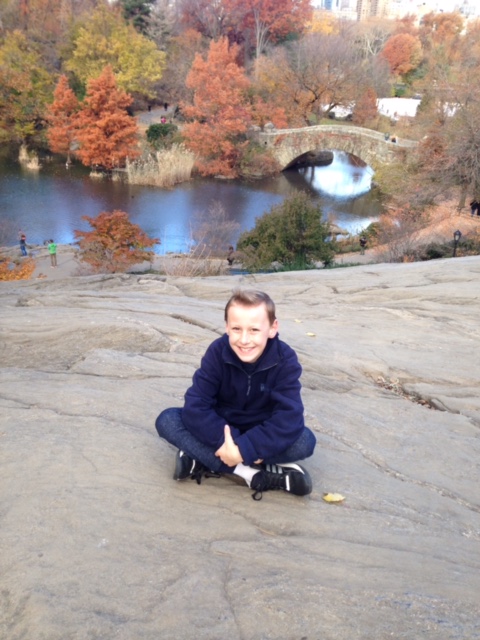